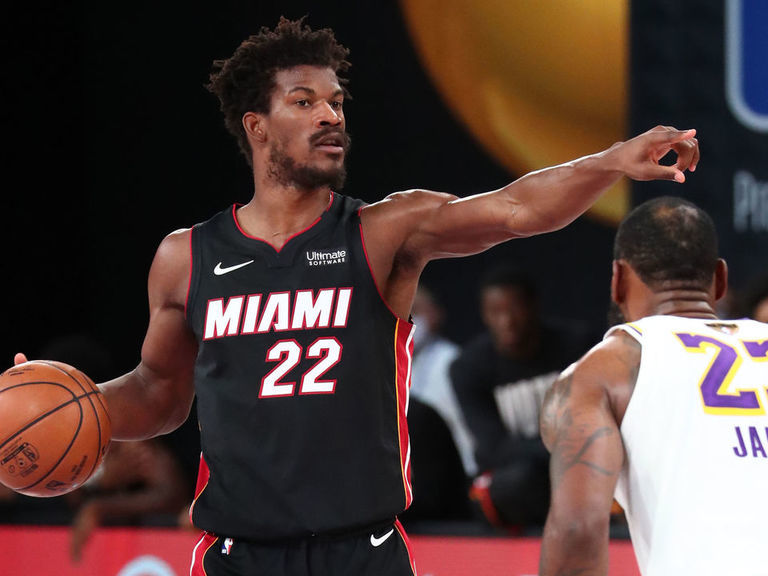 Jimmy Butler delivered a masterpiece with the Miami Heat‘s backs against the wall.

The All-Star forward went off for 40 points, 13 assists, and 11 rebounds as the shorthanded Heat prevailed 115-104 over the Los Angeles Lakers in Game 3.

Butler’s 40-point triple-double was just the third in Finals history. He did most of his damage in the paint, scoring 26 points on 13-of-14 shooting. Only Shaquille O’Neal and LeBron James scored more points in the paint during a Finals game in the last 20 years, according to ESPN Stats & Info.

Miami immediately seized the initiative against a sluggish Lakers squad, scoring 11 points off 10 first-quarter turnovers. The Heat maintained that momentum for the entirety of the contest to earn their first win of The Finals.

Los Angeles failed to capitalize on the absences of Miami starters Bam Adebayo and Goran Dragic. Anthony Davis had his worst performance of the championship series, as the Lakers star found himself in foul trouble throughout the evening and finished with only 15 points on 6-of-9 shooting.

James recorded 25 points, 10 boards, and eight assists in a losing cause. He and Davis combined for 13 of the Lakers’ 20 total turnovers.

The result put a damper on another milestone night for James, who surpassed Utah Jazz legend John Stockton for the second-most assists in NBA playoff history.

Miami can even up The Finals at two games apiece with a victory Tuesday.

Varney: Return to coronavirus lockdowns? That depends on politics

FOX Business’ Stuart Varney on Europe seeing a second wave of coronavirus and the politics of a new lockdown. Seven