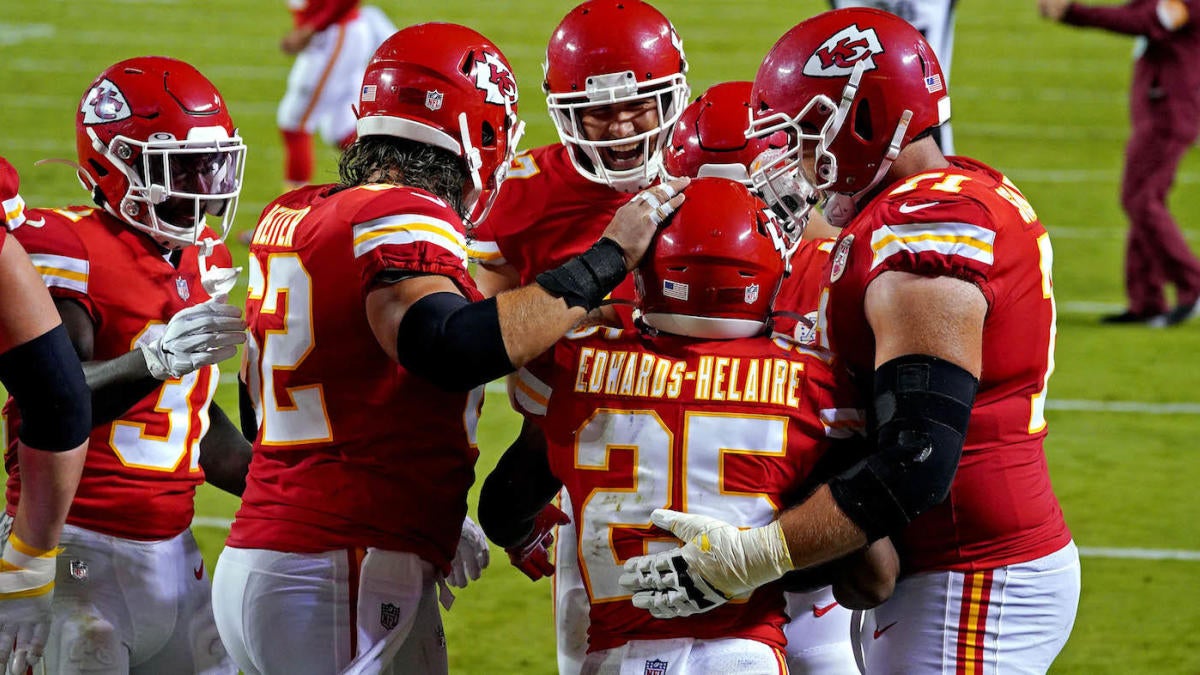 2020 has certainly been a weird one, but not even this topsy-turvy year could turn the Kansas City Chiefs into a pumpkin. Not only were the defending Super Bowl champions able to get their first win of the season during their opener against the Texans, but Patrick Mahomes and company look like they are in midseason form and primed to run it back. After unveiling their Super Bowl LIV banner prior to kickoff, the Chiefs moved to 1-0 on the season, defeating Houston, 34-20, in a game that was not as close as the final score suggests.

Patrick Mahomes continued to show why he’s the new face of the NFL, completing 24 of his 32 passes for 211 yards and three touchdowns. Meanwhile, this K.C. offense has seemingly found a new star in rookie running back Clyde Edwards-Helaire as he was able to rush for 138 yards on 5.5 yards per carry in the winning effort. Of course, the other two Chiefs stars that got paid this offseason in tight end Travis Kelce and defensive tackle Chris Jones were quick to start living up their massive contracts out of the gate.

As for Houston, they showed promise to start, drawing first blood, but they simply couldn’t keep up with this high octane offense that Kansas City was rolling out on Thursday night. We have a feeling this is a fate most defenses will fare when playing the Chiefs this season.

For more on how this game unfolded, scroll down for our biggest takeaways and scroll even further to see how all the action went down in real-time in our live blog.

Why the Chiefs won

The defending champions played flawlessly. It’s as simple as that. After going down by a touchdown to start the game, the club went on a 31-0 run that was similar to their win over the Texans in the Divisional Round a year ago. They were unrelenting. Patrick Mahomes was crisp as expected, but rookie running back Clyde Edwards-Helaire was particularly strong in his NFL debut. Kansas City seemed to catch Houston off guard with how effective they were able to run the football all night with Edwards-Helaire. As a team, the Chiefs totaled 166 yards on the ground.

Kansas City committed zero penalties in the first half and their lone blemish came with 12:35 to play in the third quarter.

Time of possession was also an area of dominance for the Chiefs. They held the ball for nearly 35 minutes and had one drive that nearly went 10 minutes to close out the first half. When you pair that chunk of time being chewed off with the potency of Kansas City’s offense, they’re almost unbeatable.

As for the defense, they were able to apply solid pressure on Deshaun Watson. Chris Jones forced the Texans quarterback to get rid of the ball a lot quicker than he wanted to. In all, the Chiefs totaled four sacks.

Why the Texans lost

It was déjà vu for Houston as this game was eerily similar to their Divisional Round loss to the Chiefs from last year. Out of the gate, it looked like the Texans were going to able to hang in with Kansas City after scoring the game’s first touchdown, but the rails came off soon after that. Bill O’Brien’s club saw the Chiefs score 31 unanswered points in a game that was essentially over shortly after halftime.

Penalties were critical to the Texans as there were a number of miscues that directly resulted in points for Kansas City. Zach Cunningham was called for a couple of infractions with just seconds on the clock that brought the Chiefs into chip shot range to go up by double-digits before halftime. A pass interference call in the end zone set up a touchdown late that put any sort of miracle comeback out of reach.

In the absence of DeAndre Hopkins, it was noticeable that the Texans didn’t uncork the football deep to any of its remaining receivers. Watson finished with 253 yards through the air, a touchdown and a pick. He also rushed for a touchdown. The offense as a whole seemed a bit disjointed for the bulk of the game. They did end up making the final score respectable with a late surge is garbage time, but it was just a little too late for any realistic shot at a comeback. This passing game looked noticeably less explosive without Hopkins.

On a positive note, David Johnsons showed promise in the backfield in his Houston debut, but it wasn’t a dominating display that the club could lean on.

Kansas City was really able to open it up around the midway point. At the end of the first half, Patrick Mahomes ate up a ton of clock (9:04) and traveled 91 yards to go up by seven. Then, the Chiefs defense was able to give the ball back to the offense with just 22 seconds left which they were able to turn into three points with a field goal. A couple of penalties by Texans linebacker Zach Cunningham made it a chip shot for Harrison Butker to go into the locker room up by double digits.

To start the third quarter, Kansas City was able to open up the second half with a 75-yard touchdown drive that was capped off by a 27-yard scamper to the end zone by rookie Clyde Edwards-Helaire. That created a 17 point swing in what felt like a blink of any eye and blew the game wide open. There was no turning back for the Chiefs.

Play of the game

Clyde Edwards-Helaire is the story coming out of this opening game. The Chiefs first-round back becomes the first player with 100-plus rushing yards and a rushing TD in his NFL debut since Saquon Barkley in 2018. This touchdown run opened this game wide open for the Chiefs and displayed a promising future he’ll have in the Kansas City backfield. Not only was able to shed a tackle, but Edwards-Helaire was able to change direction on a dime and show off his runaway speed.

If you drafted him in your fantasy football league, get ready for a fun rookie season from this kid.

From here, the Texans will head home and try to pick up the pieces as they open up NRG Stadium and play host to the Baltimore Ravens, who’ll be fresh off a matchup with the Cleveland Browns. As for the Chiefs, they’ll be on the road for the next two weeks, starting with a trip to Los Angeles to face the Chargers as they try to move to 2-0 on the year.

President Donald Trump will host a campaign rally in Pensacola, Florida. The rally is scheduled for 8:00 p.m. EST. This