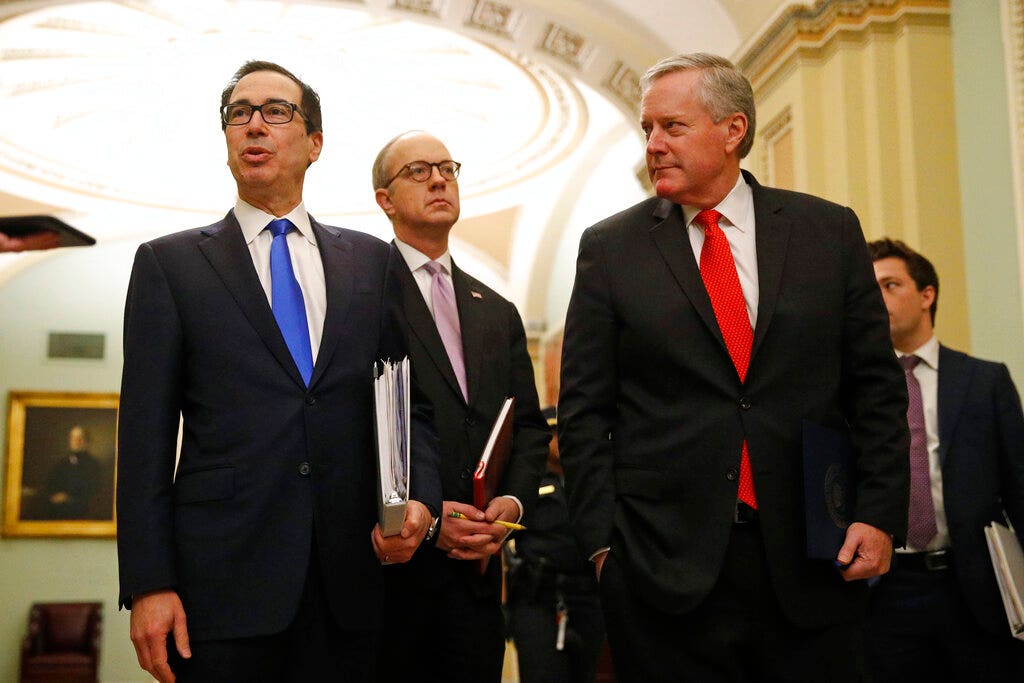 The Senate returned to Washington from its August recess on Tuesday with top Democrats and Trump administration officials no closer to cutting a deal on another coronavirus aid package than they were when talks collapsed more than a month ago.

Senate Majority Leader Mitch McConnell and other Republican leaders are planning a floor vote as soon as this week on a pared-down, $500 billion aid package that they plan to unveil Tuesday. The so-called “skinny” stimulus deal includes a partial extension of federal unemployment aid at $300 a week, liability protections for businesses and another round of funding for small businesses.

“Working families must not suffer more than necessary because Democrat leaders think citizens’ pain may help their political fortunes,” McConnell said in a statement. “Congress can, should, and must do more to help. The Senate will vote and the American people will be watching.”

But Democrats, led by House Speaker Nancy Pelosi and Minority Leader Chuck Schumer, have already panned the scaled-back proposal, instead calling for at least $2 trillion in new spending — a figure that Treasury Secretary Steven Mnuchin, a top negotiator, rejected as a “nonstarter.”

Neither side has indicated a willingness to make significant concessions, though both maintain the need to reach a compromise. The stalemate has put at risk potentially trillions of dollars in aid amid a pandemic that’s infected more than 6 million and ravaged the nation’s economy.

These are the biggest points of contention between Democrats and Republicans as talks resume this week:

Arguably the biggest sticking point is how much the aid package should cost.

Democrats have offered to come down $1 trillion from the roughly $3 trillion HEROES Act, which the House passed in May. But the White House and Republican leaders want to keep the price tag closer to $1 trillion amid growing concerns among some lawmakers over the nation’s ballooning deficit, which is projected to hit a record-shattering $3.3 trillion this year, according to the Congressional Budget Office.

Democrats are now saying they will only sit down with Republicans if they agree to a $2 trillion price tag.

“We have said again and again that we are willing to come down, meet them in the middle — that would be $2.2 trillion,” Pelosi said at the end of August. “When they’re ready to do that, we’ll be ready to discuss and negotiate.”

Aid for state and local government

The two sides are at odds over whether states should receive additional funding in the next round of emergency aid — and if so, how much. Democrats’ proposal allocates about $1 trillion in new funding for state and local governments, while the Republicans’ package includes no new funding for states.

“The stumbling block is aid to state and local governments,” White House Chief of Staff Mark Meadows told FOX Business on Tuesday. “The number that Speaker Pelosi put forth is just not supported by the facts.”

During meetings in August, Mnuchin said the administration offered $150 billion more in funding.

But Democrats rejected that offer, contending that without more federal funding, state and local governments — which combined employ about 23.2 million essential workers — will be forced to lay off employees and cut essential services. Republicans have argued it’s a “blue state bailout” for governments they say were languishing financially before the pandemic hit.

“We’re not going to bail out cities that have been poorly run for a long time,” Meadows said.

Schumer, speaking from the Senate floor, warned that the “economy is failing” and “state and local governments are cutting essential services.”

One estimate from Moody’s Analytics found that 4 million jobs are at risk if state and local governments do not receive at least $500 billion in funding over the next two years.

Another point of contention is whether to extend the federal $600-a-week boost in unemployment aid for the millions of laid-off Americans.

Democrats have maintained the sweetened benefits need to be extended through the end of the year, while Republicans have argued that it disincentivizes Americans from returning to jobs that pay less, a notion economists have disputed.

President Trump bypassed Congress and on Aug. 8 signed an executive measure partially restoring the aid at $300-a-week (states can choose to chip in an additional $100, although most have said they cannot afford to do so). However, funding for the sweetened benefits is expected to run out within just a few weeks.

Democrats have requested $60 billion in food assistance, while the GOP bill allocated $250,000.

Another disagreement between the two sides is whether to include money for the cash-poor postal service. Trump has blamed Democrats for holding up the aid package with their request to allocate more funding to the USPS and mail-in voting.

The House-backed legislation includes $25 billion in funding for the US Postal Service and would repeal several restrictions on a $10 billion line of credit for the cash-poor agency approved in an earlier aid package.

The Dallas Cowboys traded defensive end Everson Griffen to the Detroit Lions in exchange for a conditional draft pick, the

The Success Of Autonomous Vehicles Hinges On Smart Cities. Inrix Is Making It Easier To Build Them