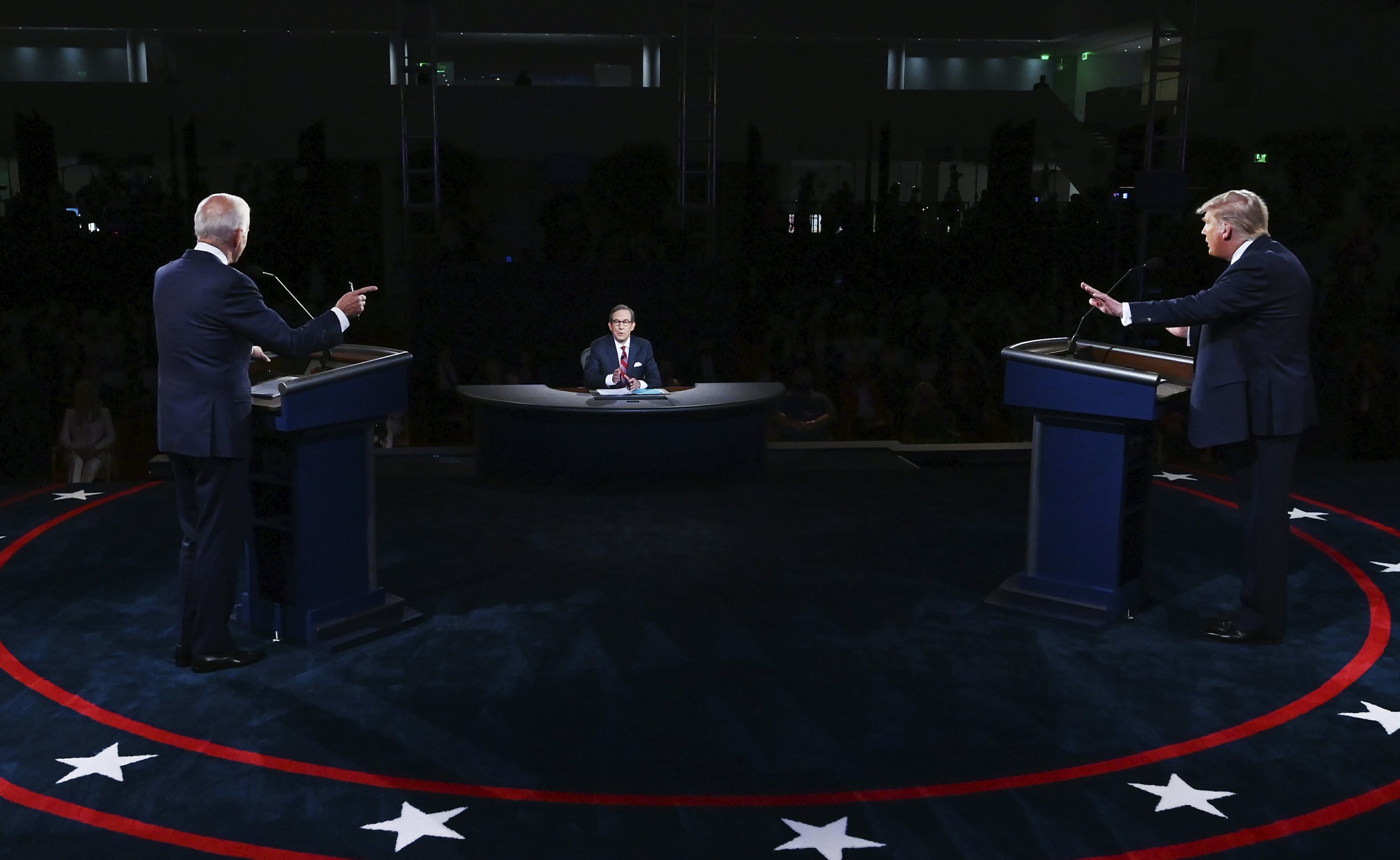 WASHINGTON (AP) — President Donald Trump’s COVID-19 diagnosis Friday cut short the week’s political arguing and even quieted his Twitter account for a time. But the wild presidential debate produced plenty of distortions in the campaign for the election a month away. Here’s a review:

THE FACTS: That’s not true. Protections for people with preexisting conditions are not guaranteed by Trump’s recent executive order, even though the president has said that’s “affirmed, signed, and done, so we can put that to rest.”

If the Supreme Court overturns Obamacare as unconstitutional, Congress and the president would have to enact legislation to replace the health law’s guarantee that people with medical problems can’t be denied coverage or charged more on account of a health condition.

Various Republican proposals debated in 2017 as replacements for Obamacare would have weakened the law’s standard. For example, one idea would have required people to maintain continuous coverage in order to avoid a surcharge on their premiums for an individual policy.

Trump’s order states that his administration is committed to ensuring affordable care to people with preexisting illness — but it does not bring that protection into effect. The order carried the general disclaimer that it is “not intended to, and does not, create any right or benefit, substantive or procedural.” In other words, it is symbolic.

BIDEN: “His own former spokesperson said, you know, riots and chaos and violence help his cause. That’s what this is about.”

TRUMP: “I don’t think she said that.”

FACT CHECK: She said that.

“The more chaos and anarchy and vandalism and violence reigns, the better it is for the very clear choice on who’s best on public safety and law and order,” the Trump adviser told “Fox and Friends” on Aug. 27.

TRUMP: “Portland — the sheriff just came out today and he said, ‘I support President Trump.’”

THE FACTS: No he didn’t. Sheriff Mike Reese of Multnomah County, Oregon, where Portland is located, said “I have never supported Donald Trump and will never support him.” Portland has been a flashpoint in the debate over racial injustice protests.

BIDEN: “There was a peaceful protest in front of the White House. What did he do? He came out of his bunker, had the military use tear gas on them.”

THE FACTS: Not exactly. It was law enforcement, not the military, that used chemical irritants to force peaceful protesters from Lafayette Square outside the White House on June 1.

And there is no evidence Trump was inside a bunker at the time. It was days earlier when Secret Service agents rushed Trump to a White House bunker as hundreds of protesters gathered outside the executive mansion, some throwing rocks and tugging at police barricades.

TRUMP: “A solicited ballot, OK, solicited, is OK. You’re soliciting. You’re asking. They send it back. You send it back. I did that. If you have an unsolicited, they’re sending millions of ballots all over the country. There’s fraud.”

THE FACTS: He’s vastly overstating the potential for fraud in “unsolicited” ballot states.

There is no such thing as an “unsolicited” ballot. Five states routinely send ballots to all registered voters so they can choose to vote through the mail or in person. Four other states and the District of Columbia will be adopting that system in November, as will almost every county in Montana. Election officials note that, by registering to vote, people are effectively requesting a ballot, so it makes no sense to call the materials sent to them “unsolicited.”

More broadly speaking, voter fraud has proved exceedingly rare. The Brennan Center for Justice in 2017 ranked the risk of ballot fraud at 0.00004% to 0.0009%, based on studies of past elections.

In the five states that regularly send ballots to all voters, there have been no major cases of fraud or difficulty counting the votes.

Trump frequently blasts “unsolicited” ballots as flawed and fraudulent while insisting that “solicited” mail ballots in certain states such as Florida, a must-win state for him, are fine and safe.

But “unsolicited” ballots are cast in the same way as “absentee” or “solicited” mail ballots, with the same level of scrutiny such as signature verification in many states.

Of the nine states automatically sending out ballots to registered voters, only Nevada is a battleground. The main states being contested — Arizona, Florida, Michigan, North Carolina, Pennsylvania and Wisconsin — only send mail ballots to voters who request them, which Trump has deemed “OK.”

TRUMP: “Well, we’re going to deliver it right away. We have the military all set up. Logistically, they’re all set up. We have our military that delivers soldiers and they can do 200,000 a day. They’re going to be delivering … it’s all set up.”

THE FACTS: This is not true.

The Pentagon says in a statement that the Centers for Disease Control and Prevention is responsible for executing the plan to distribute vaccines to the public when the time comes. The Defense Department is helping in the planning but, with perhaps some exceptions in remote areas, is not going to be delivering, as Trump claimed.

“Our best military assessment is that there is sufficient U.S. commercial transportation capacity to fully support vaccine distribution,” the department’s statement says. “There should be no need for a large commitment of DOD units or personnel to support the nationwide distribution of vaccines. Any DOD required support would be by exception.”

TRUMP, addressing Biden on U.S. deaths from COVID-19: “If you were here, it wouldn’t be (200,000 people), it would be 2 million people because you were very late on the draw. You didn’t want me to ban China, which was heavily infected…. If we would have listened to you, the country would have been left wide open.”

THE FACTS: The audacious claim that Biden as president would have seen 2 million deaths rests on a false accusation. Biden never came out against Trump’s decision to restrict travel from China. Biden was slow in staking a position on the matter but when he did, he supported the move. Biden never counseled leaving the country “wide open” in the face of the pandemic.

Trump repeatedly, and falsely, claims to have banned travel from China. He restricted it.

More than 27,000 Americans returned from mainland China in the first month after the restrictions took effect. As well, The Associated Press found that more than 8,000 Chinese and foreign nationals based in the Chinese territories of Hong Kong and Macao entered the U.S. in the first three months.

THE FACTS: That’s a big stretch, at best. No plan on the horizon would lower drug prices as dramatically as Trump claims.

Trump has been unable to get legislation to lower drug prices through Congress. Major regulatory actions from his administration are still in the works, and are likely to be challenged in court.

Prescription drug price inflation has been low and slow during the Trump years, but it hasn’t made a U-turn and sped off in the other direction. Prices have seesawed from year to year.

Looking back at the totality of Trump’s term, from January 2017 to the latest data from August 2020, drug prices went up 3.6%, according to an analysis by economist Paul Hughes-Cromwick of Altarum, a nonprofit research and consulting organization.

TRUMP, on coronavirus and his campaign rallies: “So far we have had no problem whatsoever. It’s outside, that’s a big difference according to the experts..”

THE FACTS: That’s not correct. Trump held an indoor rally in Tulsa in late June, drawing both thousands of participants and large protests. New coronavirus cases in the county more than doubled to a record high in the first week of July and local health officials said the rally probably contributed to that. Now Trump has COVID-19. Where and how he got it are unknown.

TRUMP, addressing Biden: “You didn’t do very well in swine flu. H1N1. You were a disaster.”

THE FACTS: First, Biden as vice president wasn’t running the federal response to the 2009 pandemic. As well, the government’s flu surveillance network quickly picked up on the first few cases. A public health emergency was declared about two weeks later and the national stockpile began releasing anti-flu drugs to help hospitals get ready.

It took the Trump administration seven weeks to declare a state of emergency after the first COVID-19 case was announced.

THE FACTS: No, if Trump loses reelection and employment trends stay on track in the next few months, he would be the first since Depression-era Herbert Hoover to have lost jobs during his presidency. Franklin Roosevelt defeated Hoover in 1932.

TRUMP, comparing his record on fixing the Department of Veterans Affairs to when Biden was vice president: “A fixing of the VA, which was a mess under him, 308,000 people died because they didn’t have proper health care. He was a mess.”

THE FACTS: Trump’s claim of 308,000 deaths of veterans while they were seeking VA care under Biden’s watch is unsupported.

The IG report examined claims of delayed care after the 2014 VA scandal in which several VA hospitals were found to have covered up extended waiting times for veterans seeking appointments.

The audit found that over 300,000 veterans with pending applications for VA health care were likely deceased, but it made clear that “data limitations” prevented investigators from determining how many now-deceased veterans applied for health care benefits or when. The applications go back nearly two decades, and officials said numerous applicants actually died before the start of the Obama administration in 2009 — not when Biden was vice president.

EDITOR’S NOTE — A look at the veracity of claims by political figures.