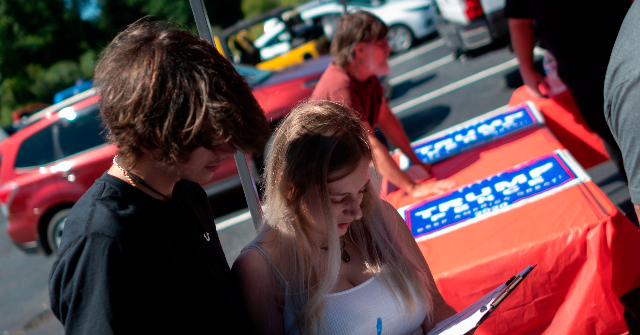 The Republican Party’s growing advantage among new voter registrants in Pennsylvania, a prime 2020 battleground, seems to indicate that the GOP and President Donald Trump are in a better position than most polls convey.

Since Trump carried the Keystone State narrowly in 2016, Republicans have seen their support grown substantially, according to a voter registration report released in June by Pennsylvania’s Department of State. That report found that between December 2015 and December 2019, the GOP gained approximately 258,705 new registrants. Over the same period, in comparison, Democrats only gained 85,779 new registrants.

Despite the advantage, Democrats still outnumber Republicans in Pennsylvania by more than 800,000 registrants. Although that split seems large, Democrats had an even larger registration advantage in 2016 when Trump bested former Secretary of State Hillary Clinton by just 44,292 votes out of more than six million ballots. Trump’s one percent margin of victory, narrow though it was, made him the first Republican to carry Pennsylvania since President George H.W. Bush’s 1988 landslide.

Since Trump took office, Republicans have only seen their support grow across the commonwealth. Much of the GOP’s success both in voter registration and electorally seems to be coming at the expense of Democrats. In 2016, Democrats accounted for 49 percent of Pennsylvania’s electorate. Today, they only account for 47 percent. The defections have been most noticeable in western and northeastern Pennsylvania, where Trump’s populist appeal appears to be fomenting a political realignment.

Although a New York City real estate developer by trade, the president has fashioned himself over the past four years as a champion of the working man. Trump’s populist stands on immigration and jobs, coupled with strong support for the Second Amendment, have been met with tremendous approval by blue-collar and working-class voters not only in Pennsylvania, but across much of the country as a whole.

In 2016, voters without a college degree backed Trump over Clinton by a margin of 52 percent to 44 percent. The split was even more decisive among non-college-educated whites, who broke for Trump by the largest margin since 1980—67 percent to 28 percent. Even though their numbers are decreasing nationally, non-college-educated white voters remain a sizable portion of the electorate throughout Pennsylvania and much of the Midwest.

Similarly, Trump’s championing of American manufacturing, as well as his opposition to free trade, struck a chord with not only blue-collar workers, but union members as well. In 2016, Trump did better among union members than any Republican since Ronald Reagan, losing the demographic to Clinton by only eight points.

Since entering the White House, Trump’s appeal to union members appears to have not diminished. Internal polling from North America’s Building Trades Unions, which was publicized by Politico in September, found that Trump lagged former Vice President Joe Biden by one percentage point (47 percent to 48 percent) among the union’s members in six key swing states.

In Pennsylvania, the realignment has been especially noticeable in Luzerne and Lackawanna Counties, two counties in the state’s northeastern region, once a bastion of Democrats.

Luzerne, where Wilkes Barre is located, was at one point home to coal mines and manufacturing plants. Like much of the industrial United States, Luzerne was hit tough by the push towards globalization in the late 1980s and early 1990s. Even as manufacturing began leaving throughout that time, the county’s residents continued backing Democrat presidential candidates by a substantial margin.

Four years ago, however, the status quo broke when Trump became the first Republican White House aspirant to win the county since 1988. Trump garnered 57.9 percent of the county’s vote against Clinton, who only took 38.6 percent, in part by appealing to the same voters that would have been considered safe Democrats even a decade prior. That point was evidenced by the fact that just four years prior, President Barack Obama had carried Luzerne by five percentage points, 51 percent to 46 percent.

Luzerne County’s increasingly favorable shift to the GOP is further evidenced by its number of new voter registrants. Between August and September of this year alone, Republicans registered more than 1,400 voters. Data from Pennsylvania’s Department of State further shows that such gains have come at the expense of Democrats. This year to date, 487 Democrats in the county have re-registered to another party, compared to only 225 for Republicans.

Overall, Democrats now account for less than 50 percent of all registered voters in Luzerne, down from a high of 59 percent in 2008.

More troubling for Democrats have been the GOP gains in neighboring Lackawanna County. Home to Scranton and the city’s large blue-collar and Catholic population, the country has historically been another Democrat stronghold. In 2012, Obama carried the county on his way to reelection by nearly 30 percentage points. The county’s affinity for Democrats remained significant in 2016, despite Trump’s appeal to blue-collar voters. In that cycle, Clinton carried Lackawanna narrowly, 49.8 percent to Trump’s 46.3 percent.

Democrats’ hold on the county might be about to break, though. In between August and September of this year, Republicans registered 470 voters. Much like in Luzerne, GOP gains appear to be coming from Democrat defections.

The Pennsylvania’s Department of State indicates that since January, more than 460 Democrats in the county have switched their party affiliation. In the same period, on the other hand, only 201 Republicans did the same in Lackawanna county. Further illustrating the divergence is that the department’s data shows 19 Democrats switched affiliations in the last week of September, compared to only four Republicans.

As the Citizens’ Voice, a local northeastern Pennsylvania newspaper, reported in July, the number of registered Democrats in Lackawanna has fallen to levels unseen since 1997.

Registration trends evidenced in Luzerne and Lackawanna are even more substantial given that the areas are losing population. Since 2010, the U.S. Census Bureau estimates that both counties are likely to lose somewhere between 3,000 to 5,000 residents by the end of the decade.

Jim Bognet, the Republican candidate for Pennsylvania’s 8th congressional district, which includes Lackawanna County and portions of Luzerne County, told Breitbart News part of the shift has resulted from Democrats moving too far out of the mainstream.

“We’re seeing tremendous enthusiasm for President Trump and Republican candidates, like me,” Bognet said. “I’m definitely talking to people on a day-to-day basis who say ‘I’ve been a Democrat all my life, but I’m voting Trump and for you because the Democrats have left me.’”

Bognet added that the Democrat’s embrace of controversial issues, such as defunding the police and an unwillingness to stand up to rioting, was only stressing that divide for average citizens.

The GOP candidate also stressed that while Democrats may be alienating voters, it was a mistake to assume, as some on the left have done, that Trump’s support among blue-collar and union workers was not real.

“I talk in my stump speech every day how in the 1980s, in this district, you could support a family on one income in the manufacturing sector, and those days [were] long gone,” Bognet said. “But my focus, and the president’s focus, on creating made in America manufacturing jobs …  is resonating with blue-collar workers.”

Local Pennsylvania Democrats seem to agree with Bognet’s assessment. Chris Patrick, the chairman of the Lackawanna County Democrat Committee, told the Citizen’s Voice in July that registering voters in the region is becoming more difficult because of the perceived “far-left liberalism” of national Democrats.

“I talk to a lot of people who I know are lifelong Democrats and they’re like, ‘I’ve had it. This Democratic Party isn’t the party that my parents belonged to. The thing has gone, far left, progressive.’” Patrick told the paper.

Given the voter registration advantage for Republicans, many strategists fear that the Democrat ticket, both up and down the ballot, faces a stronger challenge in carrying Pennsylvania this cycle than most polls suggest.

Biden, though, just now seems to be taking the threat seriously. Earlier this week, the former vice president’s campaign announced that it would restart in-person canvassing once more, something it opted to forgo at the onset of the novel coronavirus pandemic. A top target of the efforts, Biden campaign told the press, would be Pennsylvania, starting with a campaign swing through the state by the former vice president, himself.

The best smart ovens of 2020: Amazon, June, Tovala and more