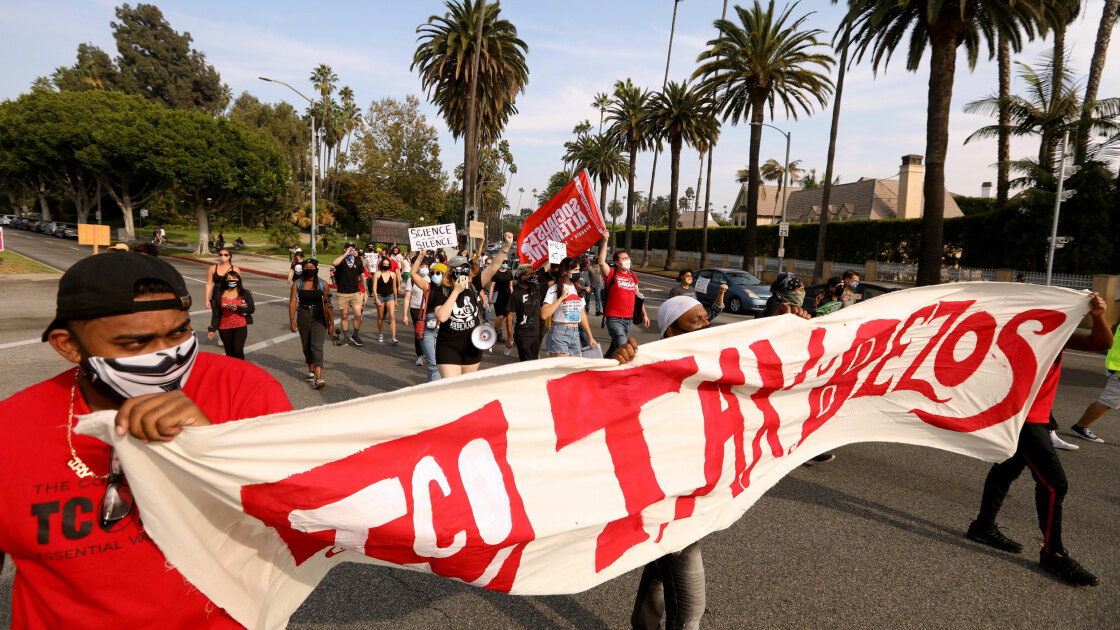 The event, dubbed #TheWrongAmazonIsBurning, was organized by The Congress Of Essential Workers and Christian Smalls, a former Amazon worker in Staten Island who was terminated earlier this year, he says, for organizing a protest over coronavirus concerns in the warehouse.

About 100 marchers demanded that Amazon pay a $30 minimum wage, offer retroactive pay, and provide personal protective equipment during the pandemic. They stood on the driveway at Bezos’ $165 million mansion with a banner that read “Tax Bezos.”

In a May interview, Smalls said he was fired after demanding that Amazon do more to protect employees who were working in a Staten Island warehouse as the coronavirus outbreak slammed New York City. “They swept me under the rug,” Smalls said of Amazon.

Amazon said today that Smalls was terminated for violating a mandatory quarantine order.

“Nothing is more important than the health and well-being of our employees, and we are doing everything we can to keep them as safe as possible,” Amazon Spokesperson Maria Boschetti said in a statement. Last week, Amazon said that approximately 20,000 of its 1.3 million employees contracted COVID-19.

“The fact is that Amazon already offers what unions are requesting for employees: industry-leading pay, a variety of benefits  packages, and opportunities for career growth, all while working in a safe, modern work environment,” Boschetti added. “At Amazon, these benefits and opportunities come with the job, as does the ability to communicate directly with the leadership of the company.”

Bezos is worth about $200 billion. But Amazon was still unable to procure enough masks when the pandemic first struck in March. “We’ve placed purchase orders for millions of face masks we want to give to our employees and contractors who cannot work from home, but very few of those orders have been filled,” Bezos said at the time.

Since then, Amazon has provided workers with more than 100 million masks, it says, and added handwashing stations, more janitorial staff, thermal cameras, and more.

On the climate, meanwhile, Amazon has battled employees over its environmental policies. Last year, workers signed an open letter, calling on the e-commerce giant to adopt a plan to phase out the use of fossil fuels, end partnerships with oil and gas companies, and to play a more active role in telling local and federal governments to reduce carbon emissions.

This year, Amazon announced The Climate Pledge Fund, a $2 billion venture-capital fund aimed at supporting businesses in a number of different sectors who are working to reduce the impact of climate change. It also decided to rename a sports venue in Seattle, Washington, the “Climate Pledge Arena.”

This weekend’s protest comes as Amazon is gearing up for its annual Prime Day shopping holiday, which is set for Oct. 13-14.

Authorities in Mexico were shocked Sunday when they seized a large, industrial-scale meth and fentanyl lab capable of processing 11,000