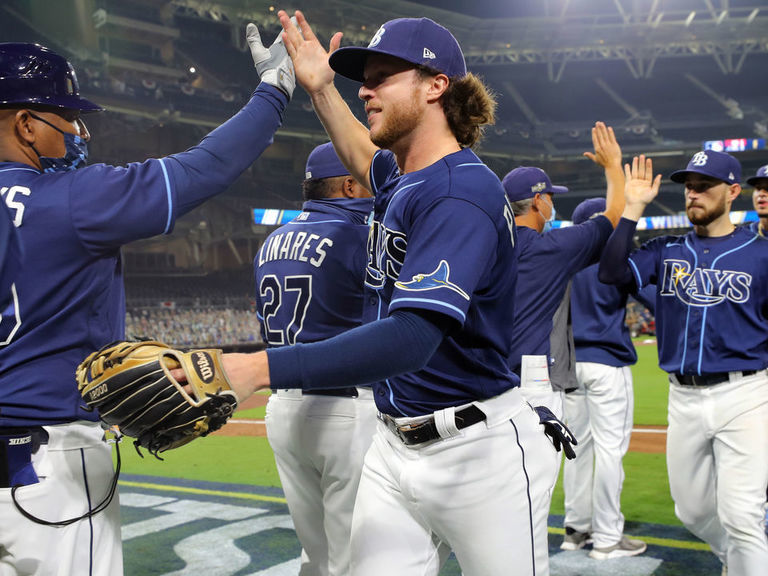 The Rays had enough pop to overcome a huge game by Giancarlo Stanton, who had two home runs and four RBI. His impressive power display included a 458-foot, three-run homer that landed under the giant video board in left field at Petco Park. It was reminiscent of the mammoth shots he hit in winning the Home Run Derby here in 2016.

Stanton has three homers this series and five in four postseason games. His grand slam in the ninth inning Monday night was the Bronx Bombers’ fourth homer in the 9-3 Game 1 win. The Yankees have 13 homers in five games.

Each team has hit six home runs in two games at the downtown ballpark, where the outfield once had the reputation as a place where fly balls went to die. The fences were moved in before the 2013 season.

DJ LeMahieu had hit an RBI single with two outs. in the ninth, and Pete Fairbanks retired Aaron Judge on a grounder with runners on the corners to end the game.

But the Rays have pop, too. Arozarena homered for the second time this series, with two outs in the first against rookie Deivi Garcia, who at 21 years, 140 days, became the youngest Yankees pitcher to make a postseason start. Arozarena’s opposite-field shot landed in the home run deck in right.

Garcia served as an opener for J.A. Happ, who surrendered Zunino’s two-run shot off the facade of the second deck in left with two outs in the second for a 2-1 lead. Happ also gave up Manuel Margot’s two-run homer to straightaway center with one out in the third for a 5-1 lead. Margot played for the San Diego Padres for four seasons before being traded to the Rays for reliever Emilio Pagan

The lead was just enough to survive Stanton’s three-run shot.

Glasnow walked Aaron Hicks to open the sixth and Diego Castillo came on and struck out 2020 home run leader Luke Voit and Stanton on three pitches each before retiring Gio Urshela on a fly ball.

Glasnow allowed three hits and four runs in five-plus innings, while walking three. His 10 strikeouts surpass the previous Rays postseason record of nine, done three times. The most recent was by Blake Snell in Game 1 of the wild-card series against Toronto.

It was the Rays’ 10th straight win when Glasnow pitches. He won his fifth straight start and seventh consecutive decision.

Tampa Bay added on with Kevin Kiermaier’s RBI single in the fifth and Meadow’s solo homer to leading off the sixth, both off Jonathan Loaisaga.

Rays: RHP Charlie Morton (0-0, 0.00 ERA) is scheduled to make his 2020 postseason debut Wednesday night for Tampa Bay, He is 4-2 with a 3.83 ERA in 10 starts against the Yankees, including 0-0 with a 2.25 ERA in two starts this season. He started against New York in Games 3 and 7 of the 2017 ALCS, going five scoreless in the deciding game to send the Astros to the World Series.

Yankees: RHP Masahiro Tanaka is scheduled to go for New York. It’ll be his 10th postseason start and second of 2020. With Garcia going just an inning, that means LHP Jordan Montgomery would go in Game 4 and if needed, ace Gerrit Cole in Game 5, which would be his first ever start on short rest.

Week 8 preview: Time for some division rivals to sort out their issues

A rundown of the best games and most interesting trends to watch for in Week 8 of the NFL. All

Donald Trump’s Walk Of Fame Star Vandalized By Man With A Pickaxe, Turns Himself In Afterwards