Major League Soccer’s hunt for the MLS Cup is heating up, as the eight spots in the conference semifinals are now set following the opening round of action.

Some of the bluebloods have made their way to the next round, but there have been plenty of surprises along the way.

Let’s get you up to speed on how we got here.

Seattle, the West’s No. 2 seed, made quick work out of No. 7 LAFC, with Nicolas Lodeiro putting the home team ahead in 18th minute.

Seattle would have to wait until the second half to extend its lead, when Raul Ruidaz slotted home in the 66th minute. Eduard Atuesta then pulled one back for LAFC in the 77th, but Jordan Morris iced the game with an 80th-minute strike to give Seattle a 3-1 lead.

For Seattle, they move on to the conference semis to face sixth-seeded FC Dallas, which knocked out the third-seeded Portland Timbers in an epic penalty-kick shootout. FC Dallas will visit Seattle on Tuesday at 9:30 p.m. ET on FS1.

Meanwhile, LAFC will be left nursing its wounds after being dispatched from the MLS Cup playoffs at Seattle’s hand in back-to-back seasons. They’ll also be pondering how the match would have gone if they had the likes of Golden Boot winner Diego Rossi, as well as Brian Rodriguez, Diego Palacios and Jose Cifuentes, in the fold.

All four players were unavailable due to testing positive for COVID-19 during the recent international break.

We’re not sure where the team “stood on his head” comes to as it relates to goalkeepers, but Sporting Kansas City’s Tim Melia did just that in a penalty shootout against the San Jose Earthquakes. 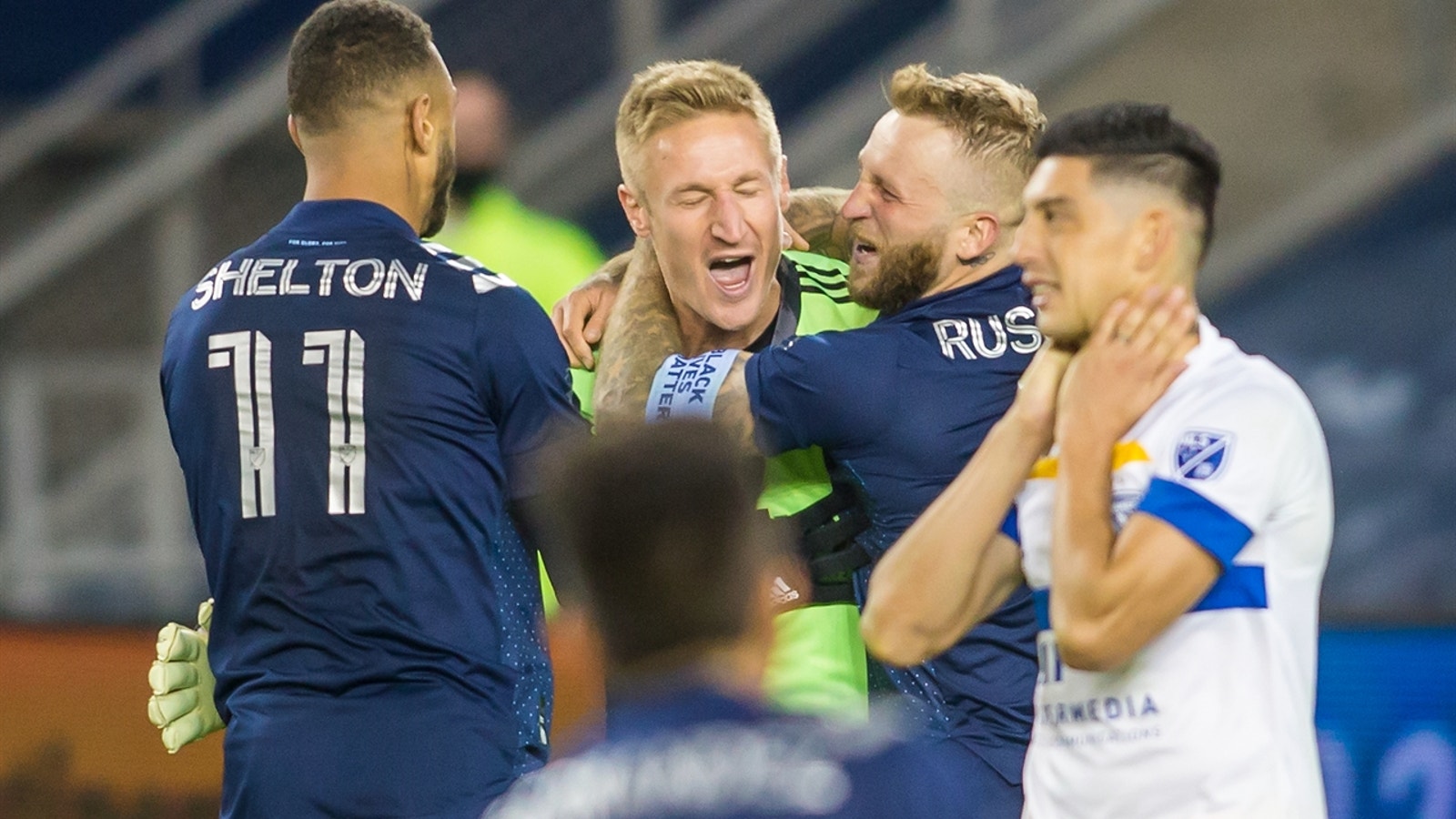 The Quakes pushed the West’s top seed to the brink, as the two teams traded punches throughout the match. Roger Espinoza put the hosts ahead early, but a pair of goals for San Jose gave the No. 8 seed a 2-1 lead heading into halftime.

After Ilie Sanchez tied it up in the 47th minute, it looked as though Sporting would go through in regulation after Gianluca Busio’s goal made the score 3-2 in the 91st minute.

But 37-year-old Quakes striker Chris Wondolowski had other ideas, scoring the game-tying goal in the 97th minute to send the game to extra time and eventually penalties.

Enter: Melia. The Sporting KC keeper saved all three shots he faced in the shootout, while SKC buried all three of theirs to claim the victory. 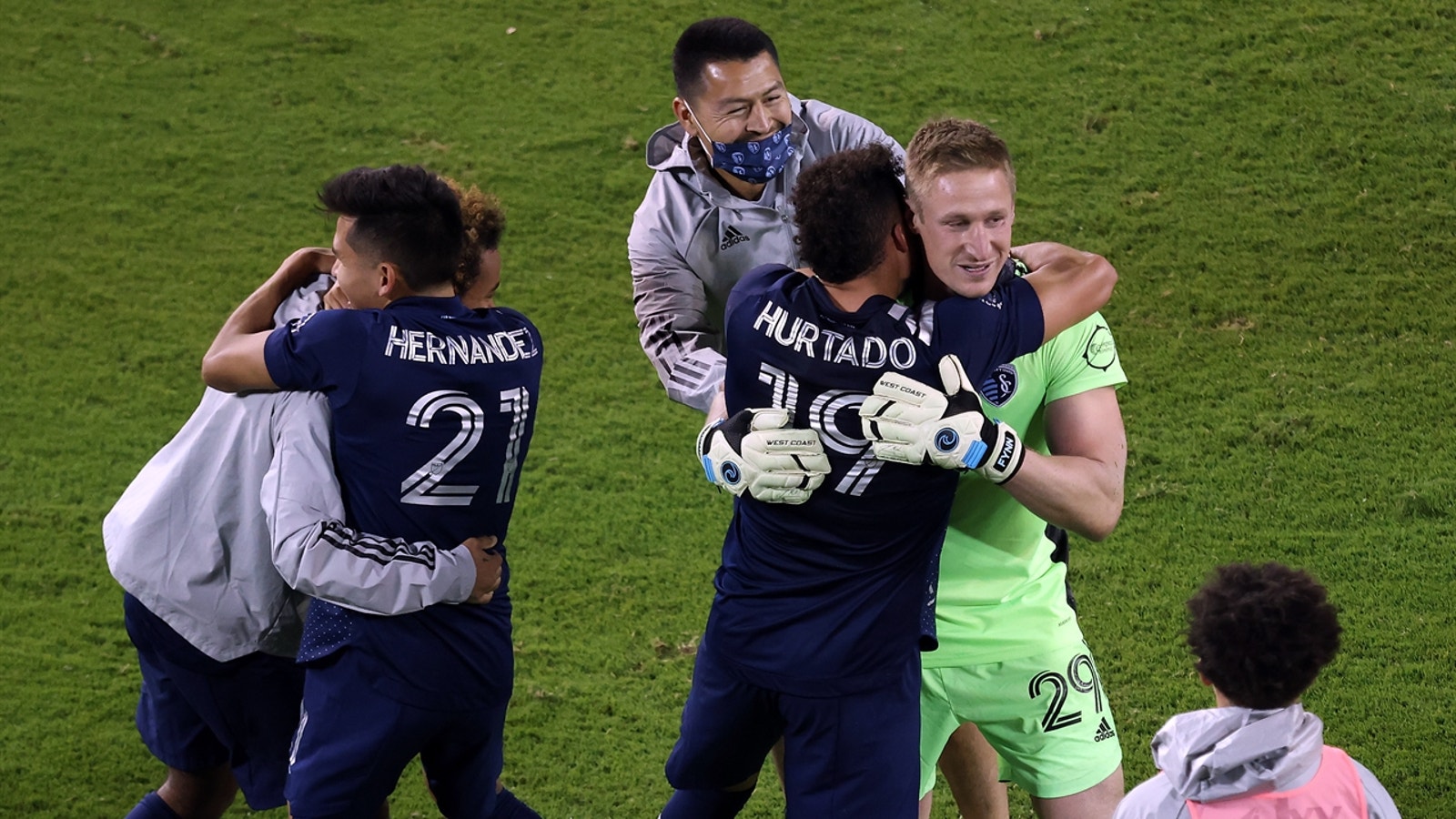 After that narrow escape, SKC moves on to face Minnesota United, which rolled 3-0 in its clash against No. 5 Colorado Rapids. Sporting KC vs. Minnesota United will be played Wednesday at 9 p.m. ET on FS1.

What an inaugural season for Nashville SC!

Just making the playoffs as the No. 7 seed wasn’t enough for the expansion side, as they went ahead and took down the No. 2 seed, Toronto FC.

Nashville carried its momentum from the end of the season into the playoffs, beating Inter Miami 3-0 in the play-in round and then going toe-to-toe with the 2017 MLS Cup champs in Toronto FC.

The expansion team had a trio of near goals called back for being offside, as the game remained 0-0 at the end of regulation.

But Daniel Rios finally found the breakthrough for Nashville SC in the 108th minute, after midfielder Hany Mukhtar weaved through Toronto’s back line to fire off a shot that keeper Quentin Westberg could do little but parry away into the path of the oncoming Rios. 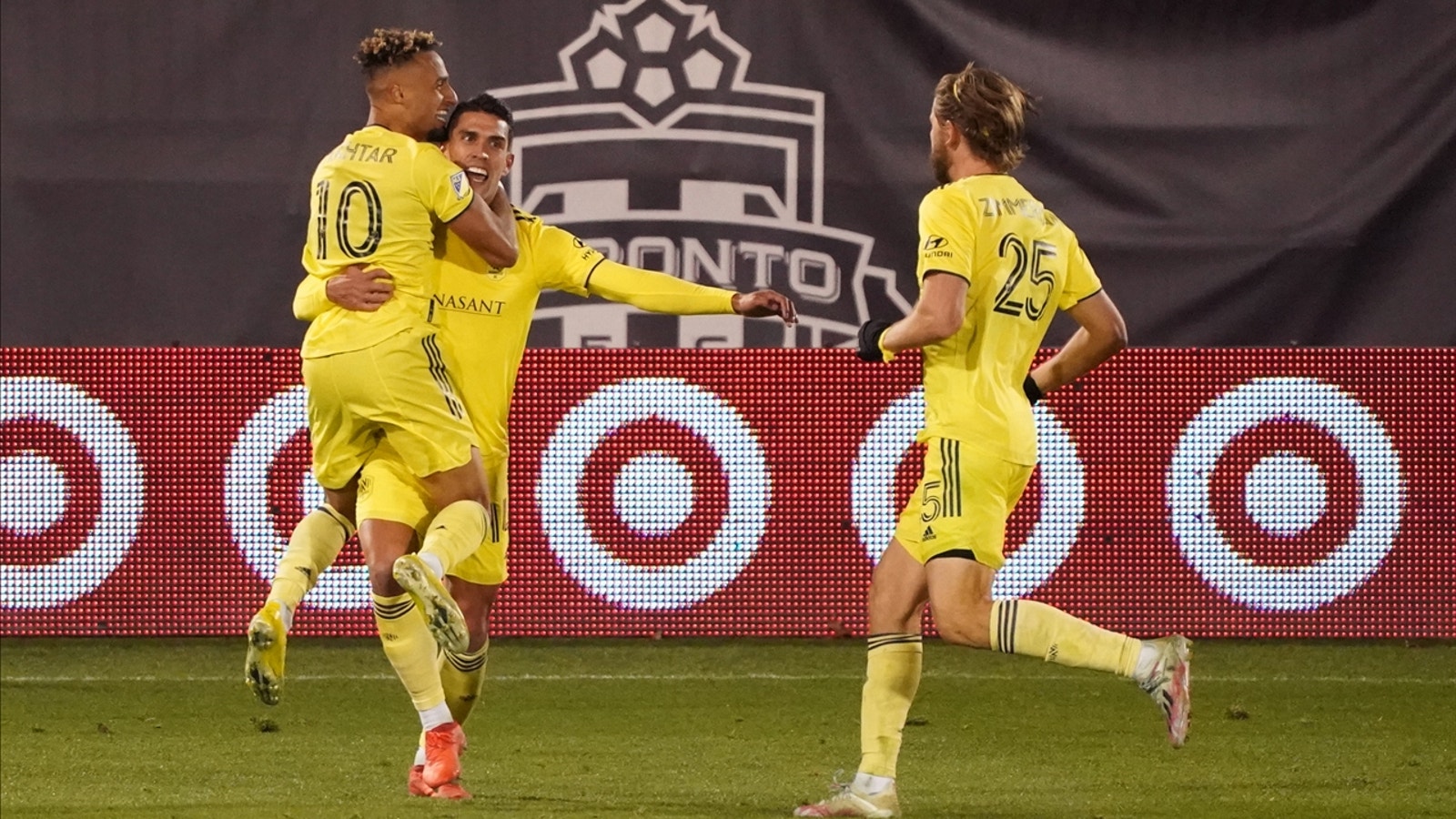 Coupled with Columbus Crew SC’s 3-2 win against the New York Red Bulls, Nashville is set to take on the Darlington Nagbe-led Crew SC on Saturday at 8 p.m. ET on ESPN.

Not to be outdone by Nashville’s upset against Toronto FC, the New England Revolution put the screws to the Supporters’ Shield-winning Philadelphia Union in an 8 vs. 1 upset special.

The Revs failed to beat the Union in four regular season matchups in 2020, but delivered when it mattered most on Tuesday. Carles Gil led the charge for New England, as the Spanish midfielder put the opening goal on a plate for Adam Buksa to head home off of a free kick.

The Revs would snatch another just four minutes later, with Gil providing another assist for Tajon Buchanan to slot home and put New England up 2-0. 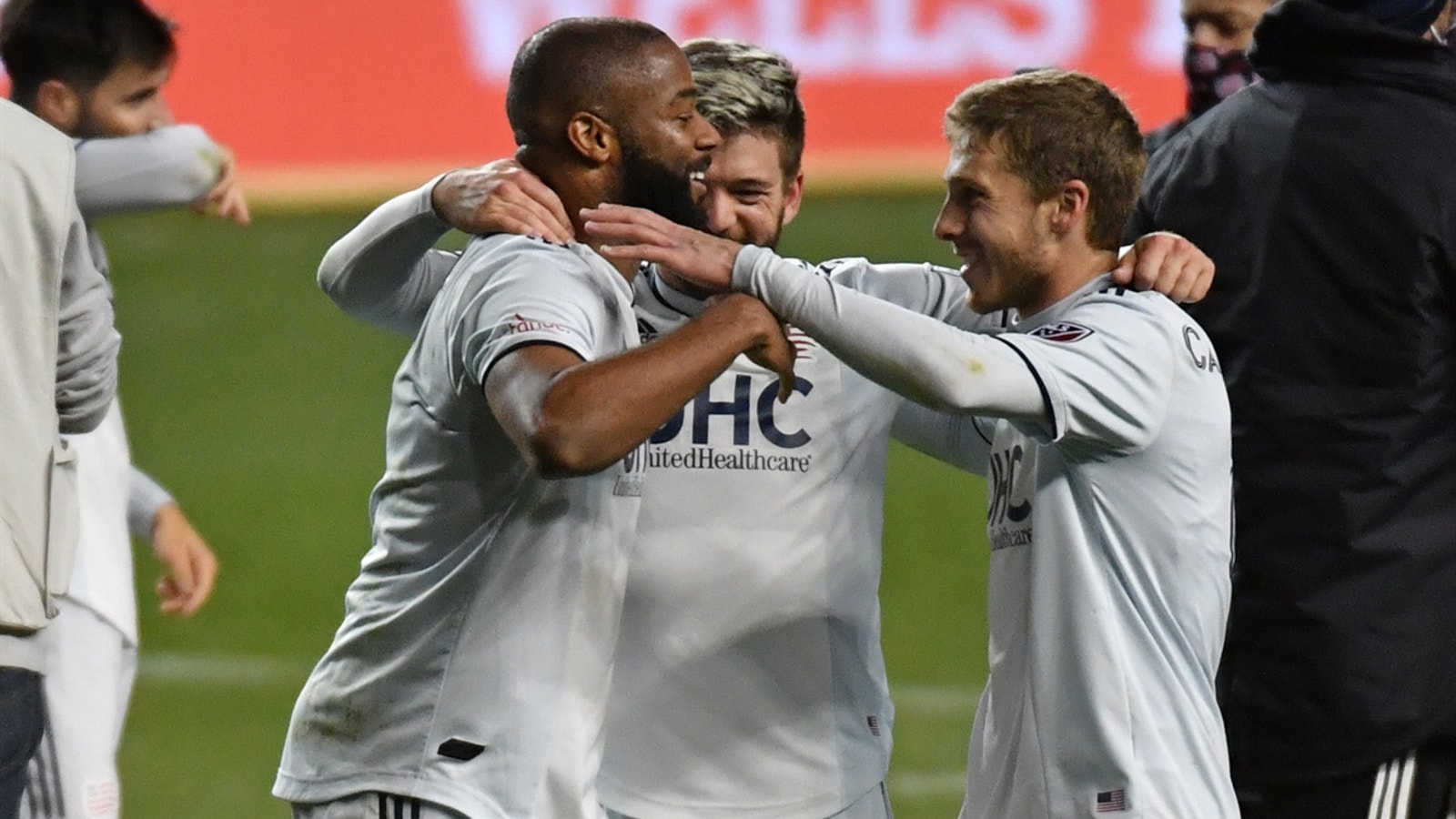 The triumph pits New England against No. 4 Orlando City SC, which advanced past NYCFC in epic fashion on Saturday, using a field player in goal to close out the penalty shootout.

Orlando lost starting keeper Pedro Gallese midway through the shootout against NYCFC due to yellow card accumulation, leaving center back Rodrigo Schlegel to don the gloves between the pipes.

Schlegel did the unthinkable, denying NYCFC’s Gudmundur Thorarinsson before OCSC’s Benji Michel booted him the match-winner.

What drama can we expect in the conference semis?

If the opening round of MLS playoff action is any indication, there will be plenty.

Get more from MLS Add to your favorites to get information about games, news and more.

SHAPIRO: This Is Not Normal

For four years, we were informed by our establishment media that President Donald Trump’s behavior was “not normal.” The abnormality

01/27/2021 Bluegrass Direct News
We use cookies on our website to give you the most relevant experience by remembering your preferences and repeat visits. By clicking “Accept”, you consent to the use of ALL the cookies.
Cookie settingsACCEPT
Manage consent