One of the best things about fans is their ability to sniff out anything remotely different in the world of sports.

Crowd shots usually provide a great opportunity to find the bizarre, because there’s always that one guy with his face painted, reading Dante’s Inferno in the nosebleeds. But it’s tough to find those people in a year when most fans are cardboard.

FOX’s NFL graphics — such as the ones above for Aaron Rodgers, Ben Roethlisberger, DK Metcalf, Cam Newton and Philip Rivers — immediately caught the eye of TV viewers.

So it wasn’t much of a surprise to me when NFL viewers became fascinated by the illustrations of players that FOX Sports uses in its new broadcast graphics package.

“That portrait is really cool,” DeAndre Hopkins said when we asked him about his picture. He was even fooled for a second: “And really lifelike. At first I thought it was an actual photo. But they did a great job with this one and all the others.” 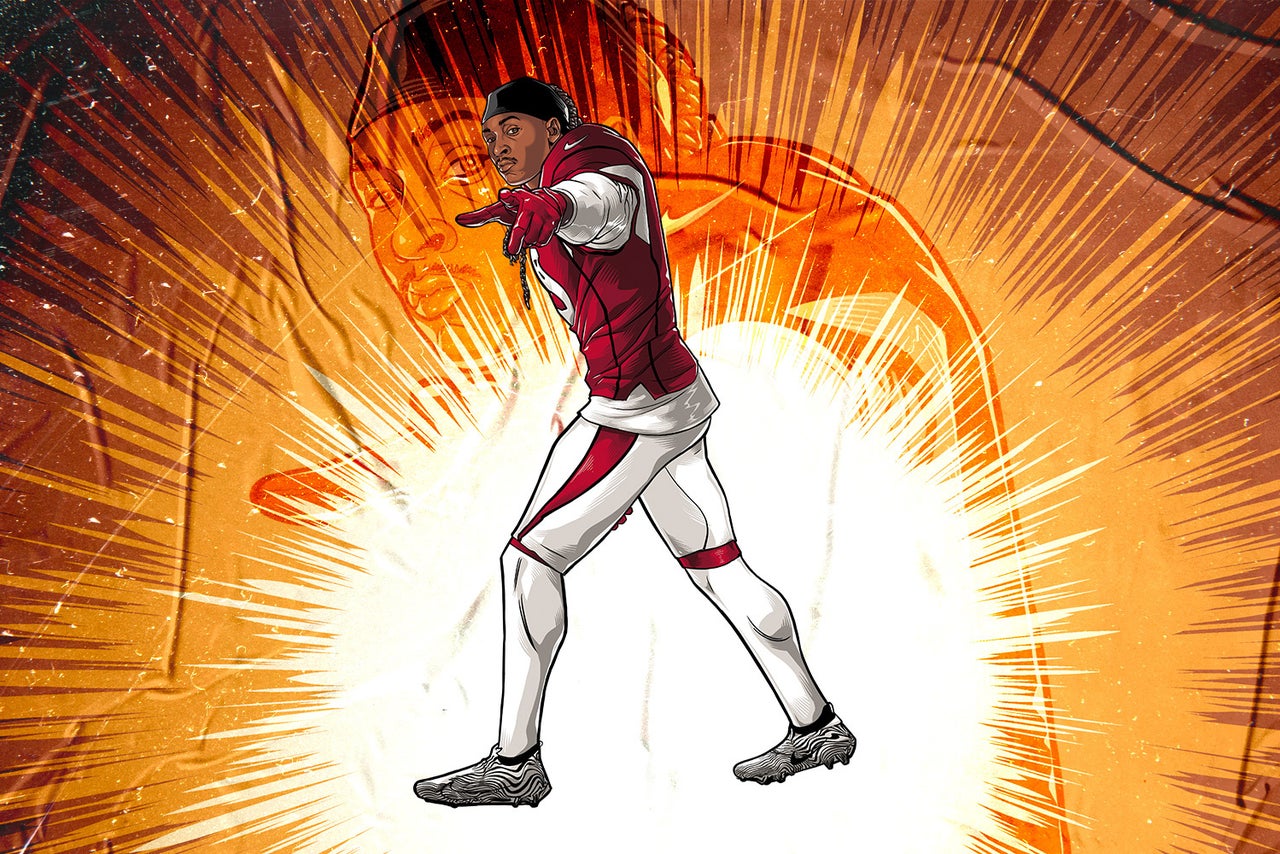 Cardinals receiver DeAndre Hopkins found his illustration so lifelike that he thought it was an actual photo at first.

Fans have ranked the graphics, tweeted about them, and noticed when one changes. Illustrations of football players is the sort of thing to which I pay way too much attention (anyone who remembers my deep dive into Tom Brady’s social media is like, “We know.”), so I’ve loved watching the evolution of the fascination.

Who made these? I wondered. What’s the deal?

And then I realized I work for the network that’s putting them on television. So I asked.

It turns out that my colleague Gary Hartley is the person responsible for these images. He’s the executive vice president and creative director of FOX Sports Creative Services, and is in charge of everything you see on TV that isn’t live action, from the scoreboard to the names of players.

He’s also the man who invented “Cleatus,” the FOX Sports robot (“That’s gonna be on my tombstone,” he joked). 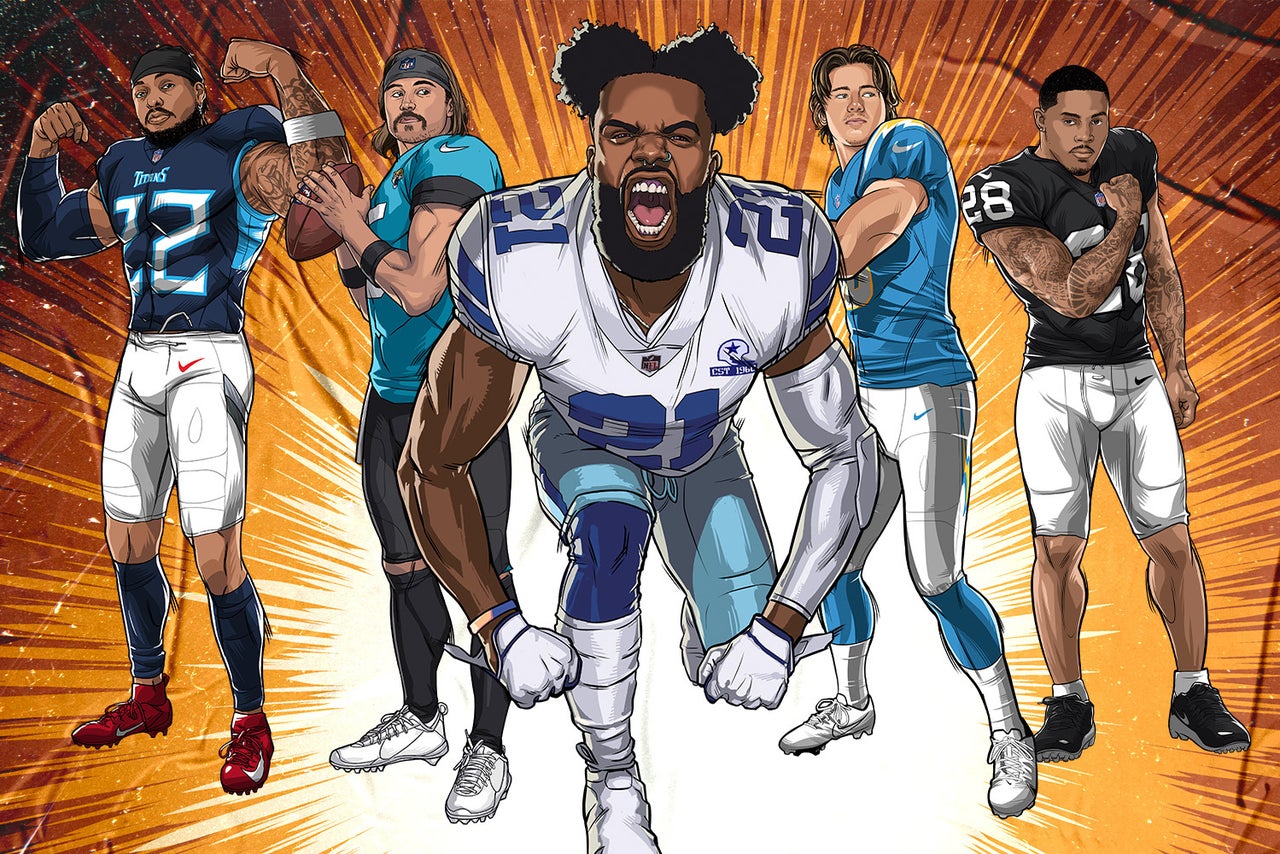 The idea was to convey the players as larger-than-life superheroes, which is on display here for Derrick Henry, Gardner Minshew, Ezekiel Elliott, Justin Herbert and Josh Jacobs.

Hartley, however, didn’t come up with the idea — this one came straight from FOX Sports CEO Eric Shanks.

“Eric said, ‘You know, we talk about these guys like they’re superheroes,’” Hartley told me. “‘Instead of using straight-up photographs of them, maybe we use illustrations.’ And that kind of migrated into more of a graphic novel kind of vibe than a cartoon.”

You might not remember, because the 2020 Super Bowl feels like it was fifteen years ago, but the network originally rolled these bad boys out in February for the biggest game of the year. Shanks wanted something that felt larger than life, so Hartley said the plan for this season was to build a new graphics package and make sure every player in the league had an illustration.

But then COVID-19 hit, and like most plans this year, this one completely changed. 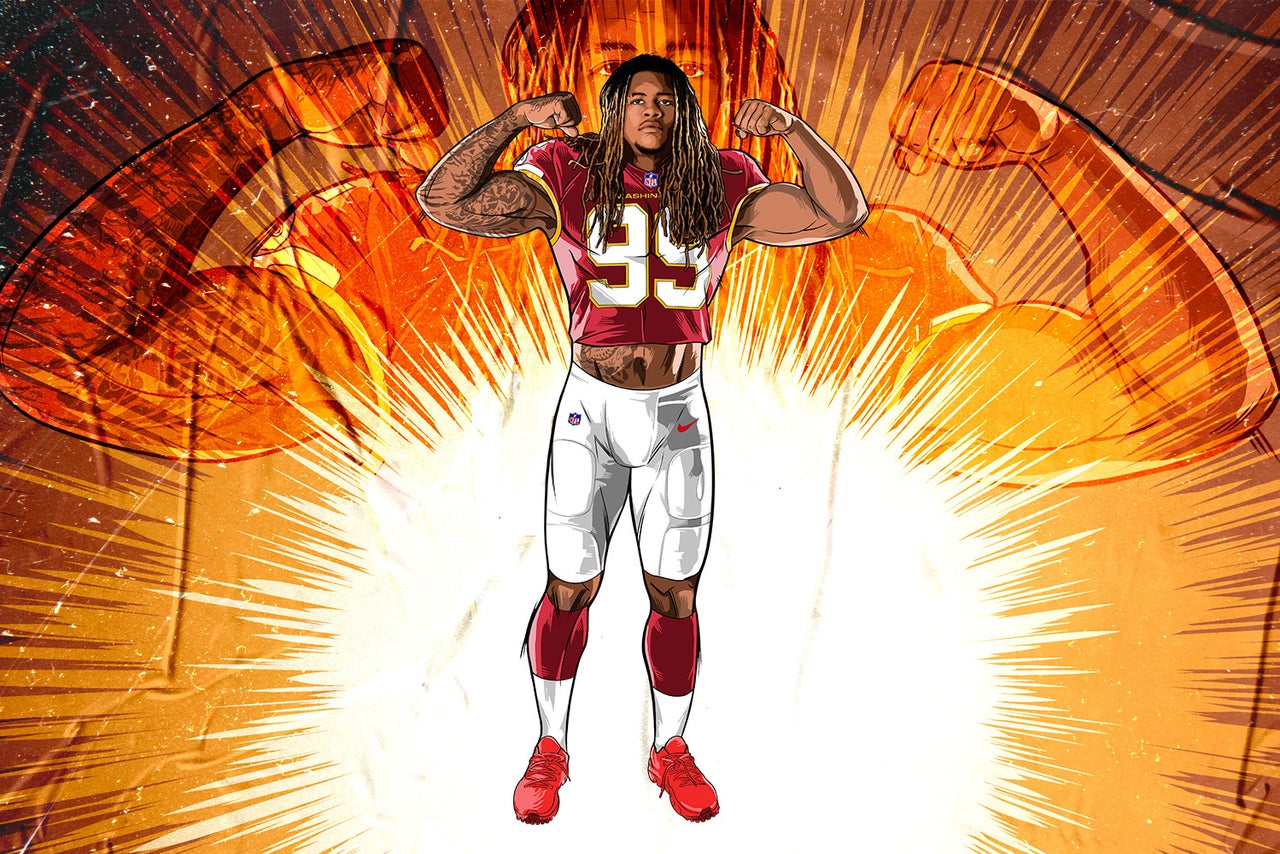 Washington defensive end Chase Young said “it’s really wild to have one of my own” when he saw his portrait.

Originally, Hartley was going to send a photographer into locker rooms to take pictures of every player in fun poses with dramatic lighting. His team needed these reference images to send to the artists down the road who’d be responsible for illustrating each player. The graphics team hired the production company Engine Room, which finds illustrators around the world to contract for illustrations. The image each artist works from informs the direction of the whole look.

But sending a photographer in for a big shoot wasn’t exactly in compliance with COVID-19 protocol. In fact, for the first time ever, all the networks that air NFL games got together and decided to share images, so the teams would only need to do one shoot.

Some teams didn’t take new pictures at all. Philadelphia only shot the rookies and guys who joined this year, using old images of players who were already on the roster.

Hartley wasn’t expecting to move forward with the project because FOX wasn’t able to hold individual photoshoots, but Shanks wanted to do it.

“What’s cool about Eric is he comes up with ideas like this all the time, and they seem impossible to execute,” Hartley said. “But then you do them and feel kind of dumb for pushing back on it.”

So Hartley and his team sprang into action at the beginning of the season. Graphic producer Danielle Stocki started grabbing photos from the NFL shoot in whatever poses she could find. If teams didn’t have fresh photos, she and others on the team went to Getty Images to find something that worked. In a lot of cases, they had to cobble together a head from one shot and body from another. 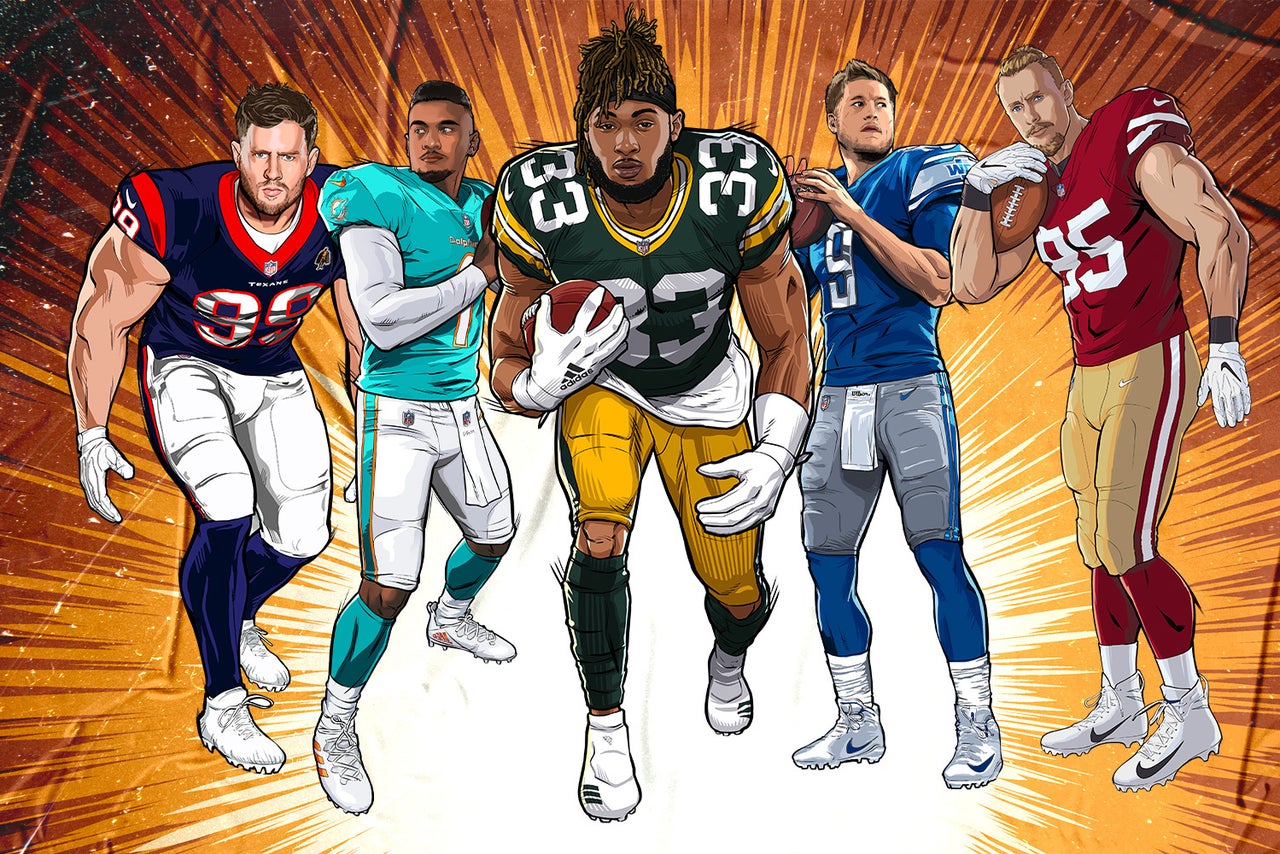 “The whole mission is to exaggerate features of players,” Hartley said. “There’s no way Drew Brees is that buffed out, but [we wanted to] kind of exaggerate them and make them bigger than life.”

It took about a month to get all of the illustrations done. Hartley’s team worked with Engine Room and anywhere between 20 and 50 artists at a time. They prioritized players whose games FOX Sports was broadcasting, starting with the skill players and guys who Hartley calls “defensive studs.” Then they worked through the rest, and the graphics began popping up in the studio shows and during games.

Speaking of defensive studs, Washington’s Chase Young was psyched to have a drawing of himself.

“That is really cool and really well-done,” he said. “I have seen a bunch of these on TV during games and it’s really wild to have one of my own. That’s awesome.”

Young isn’t the only defensive stud to be impressed with his comic-book alter-ego. Aaron Donald, the two-time NFL defensive player is also a huge fan.

“The cartoon is dope,” the Rams’ All-Pro defensive tackle said. “I think all the pictures FOX has done this year really look like the guys.” 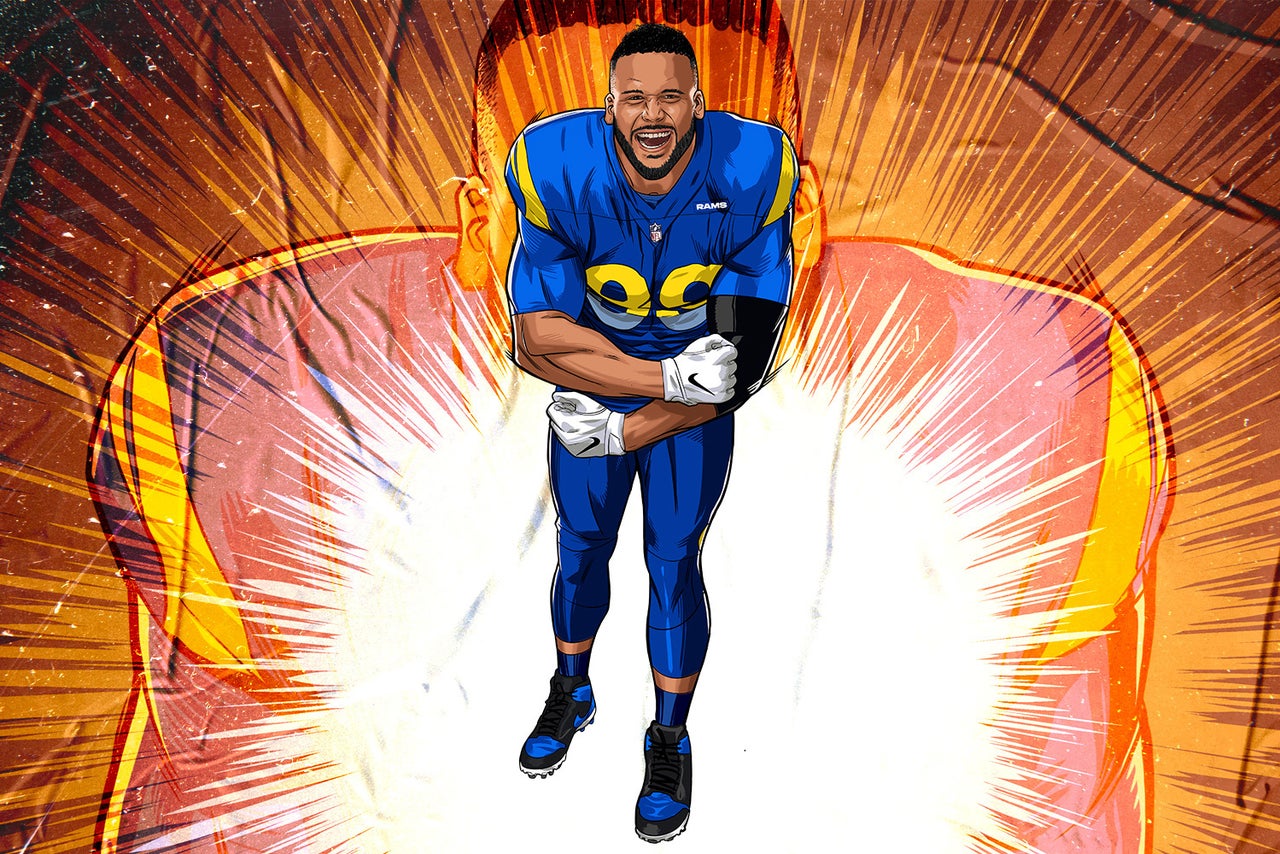 While some of the illustrations might exaggerate the players’ features, we think Aaron Donald’s muscles are actual-sized.

Harltey says the next step is to make a package based off the pictures FOX photographers can take specifically for this purpose. He wants to make them more heroic and even more stylized.

“If we have control over the sourced photos, you can push that genre quite a bit into the really cool graphic-novels vibe, a Jason Shawn Alexander kind of vibe – really expressive stuff,” Hartley said. “I’m talking about capturing an essence — this is art speak, this is the art school comin’ out — of who they are more so than a photographic representation. And if you get really good at that, and you get into a pipeline that’s strong enough to produce those things, it’s got head room. You can do a lot with it.”

Hartley hopes that these illustrations become a part of the viewing experience the way Cleatus has — the robot started out as a new and bizarre thing that has become a hallmark of broadcasts.

Hartley has fun playing around with ideas. During the winter of the 1995 season, the second year that FOX Sports had broadcast rights, Hartley designed a scoreboard that collected snow. Eventually the numbers became obscured by the drifts and an animated snowplow would come shovel it off.

Hartley says it’s possible that in the future these illustrations will become animations. So maybe the illustrated Chase Young might be able to flex his muscles one day.

Or perhaps they’ll put a cape on Tom Brady and make him fly.

A sports fan can dream.

On Tuesday, Microsoft stated that a hacking group backed by the Chinese government is reportedly using the security deficiencies in

Asylum-Seekers Test Positive For COVID After Being Released Into U.S. By Border Patrol: NBC News

03/03/2021 Bluegrass Direct News
We use cookies on our website to give you the most relevant experience by remembering your preferences and repeat visits. By clicking “Accept”, you consent to the use of ALL the cookies.
Cookie settingsACCEPT
Manage consent