Tom Brady’s doubters are going to be right, eventually. They have to be. If your basic premise is that Brady is no longer this – a quarterback capable of producing high quality output in the National Football League –it is really just a waiting game.

One day, he won’t be. Not anymore.

Yet that day wasn’t Sunday, and it wasn’t either of the previous two weekends. The more Brady goes on winning with the Tampa Bay Buccaneers and continues to look like anything but 43 years old, you wonder if this isn’t 2016, or 2017, or 2018, or … you get the picture … all over again.

For Brady was supposed to slump then, too, based off the standard thinking that a guy pressing 40, let alone moving by that seminal marker, couldn’t still be great even if he’d been better-than-great previously.

It was an argument that could call upon all those examples of older quarterbacks who couldn’t sustain what they needed to. When legs weren’t sharp enough to dance out of trouble, or arms became too overused to hurl it long, or when the football mind dimmed, blessed with endless knowledge but too worn out to use it.

However, going into Thursday night’s matchup with the Chicago Bears, there are some different narratives to accompany the persistent raised-eyebrow brigade. The tone has shifted and so have the topics. The growing thought is that Brady has been energized by his switch from the New England Patriots, where he won all of those Super Bowls.

And that, having won three straight after a loss to the New Orleans Saints to begin the campaign, he is hungry for more and the Buccaneers are just starting to get into stride.

“(Bruce) Arians and Tom Brady are settling in,” former Pro Bowl wide receiver and FS1’s First Things First co-host Brandon Marshall said. “They made it through the wedding and they are settled in the house with all the furniture in place. Now they are ready to roll. You saw Tom Brady comfortable (last weekend).”

Bolstered by an outstanding offensive line highlighted by a slab of immovable interior muscle and some standout play from rookie tackle Tristan Wirfs, Brady has found his smooth rhythm return.

Against the Los Angeles Chargers on Sunday, he saw the Bucs fall behind by 17 points, thanks in part to a pick-six for which he was at fault. But then, Brady tossed five touchdown passes to turn things around, finishing up with 369 yards.

There were all sorts of other Brady-type numbers, for when you’ve been around that long, you collect stats like trading cards. It was his 34th comeback from 10 points-or-more and 46th game-winning drive in the fourth quarter or overtime. It even took him past kicker Adam Vinatieri as the winningest NFL player of all time, at any position.

According to Arians, Brady never believes in his mind that a cause is lost. Presumably, he never feels old either and if he does, he’s not acting like it.

What the Bucs now have is an opportunity to grow their NFC South lead against a Chicago Bears squad that was the worst of the remaining undefeated teams, until they fell to the Indianapolis Colts.

It is a rematch between Brady and Nick Foles, whose Philly special with the Eagles consigned Brady’s Patriots to Super Bowl LII disappointment and it comes just when things are starting to flow nicely.

“This the Tom I expect to see, this is the norm we are going to get for the next 12 weeks,” FOX Sports NFL analyst Michael Vick said. “When you have a game like (Sunday’s) around Week 3 or 4, that ball starts to feel a little different. The pocket presence starts to show up.

“Tom had that rhythm even though they had to come from behind. It is all about mojo and Tom had that.”

It is time to start asking about what Brady can do with this reimagined second career he is attempting. When he signed a two-year, $50 million deal last summer following two decades in Foxborough, he insisted he was continuing because he felt he could be relevant.

Per FiveThirtyEight, the Bucs have a 73 percent chance to make the postseason and a 49 percent shot at winning the division. FOX Bet has them as a 5.5-point favorite over the Bears on the road, and +1400 odds to win the Super Bowl.

Limitations may come from Brady having been unable to immediately settle upon a preferred hierarchy of receiving options. Against the Chargers, his five TDs were thrown to five different guys and tight end O.J. Howard’s season is over following a serious Achilles injury.

It could be that Brady is carefully taking his time to involve everyone and work out what options fit. For Hall of Fame tight end Tony Gonzalez, it is something that needs to get sorted quickly.

“That’s what has really slowed this offense down,” Gonzalez told Colin Cowherd on The Herd. “You need two main guys in the passing game, those guys are going to catch over 80 balls and then you have another guy who catches 50, 55.

“When you are trying to spread the ball around and throw it to everybody, that’s where the confusion comes in. I don’t like buffets, too many choices. I want a specialty of the house.”

In truth, Brady is still figuring things out. That, more than anything, might be the most impressive part of all, that he has been able to adapt while still winning games. He’s starting to get comfortable and, whisper it now, he’s looking better with each passing week – so much so that some are wondering whether he’ll even try to play on past these two years, the ultimate footballing Peter Pan.

One day, the doubters will be proven right. Until then, he is having plenty of fun proving them wrong.

Enter the NFL Challenge contest on the FOX Super 6 app for free and you can win the $100,000 jackpot! Download now at foxsuper6.com! 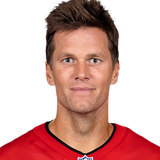 Get more from Tom Brady Add to your favorites to get information about games, news and more.

Sen. Kamala Harris (D-CA) was introduced as the “next president of the United States” at a campaign event in Fort

Governor calls this a “dangerous time” as COVID-19 cases surge