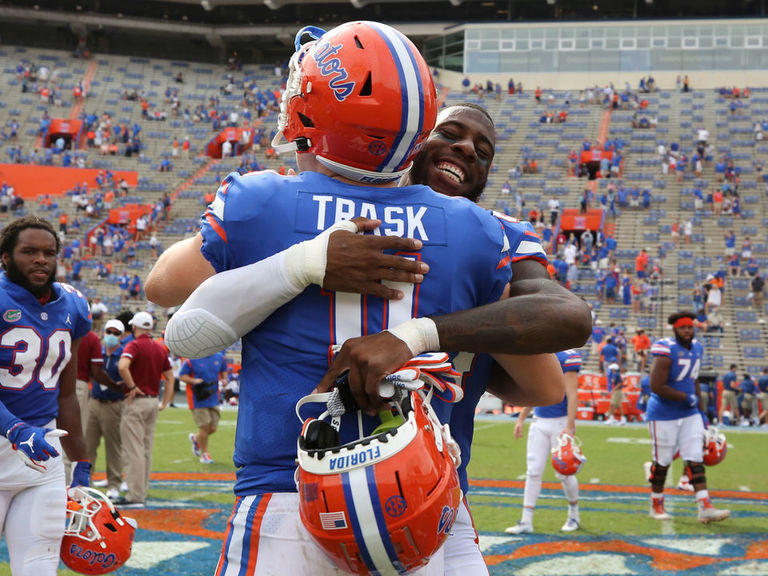 GAINESVILLE, Fla. (AP) — Kyle Trask and Kyle Pitts hooked up for two more touchdowns, continuing their hot start and leading No. 3 Florida to a 38-24 victory over South Carolina on Saturday.

Trask completed 21 of 29 passes for 268 yards, with four touchdowns and an interception. His second-quarter fumble kept the Gamecocks (0-2) in the game early.

Pitts finished with four receptions for 57 yards, commanding extra attention and beating South Carolina’s top defenders. He nearly made a one-handed catch in the third quarter, but the ball slipped off his left fingertips.

The K2K connection now has six touchdowns in two games, one more than it notched in 2019. The next performance comes at Kyle Field, where Texas A&M will try to become the first Southeastern Conference opponent to slow down Trask and Pitts in 2020.

Some thought former Florida coach Will Muschamp and his Gamecocks would find a way. But the Gators (2-0) had their way with South Carolina for three quarters in front of 15,120 socially distant fans in the Swamp. They finished with 347 yards and punted twice.

Kadarius Toney put an exclamation point on the victory with a 57-yard touchdown catch late in the third. He somehow broke through three defenders, turning a 7-yard catch into Florida’s biggest gain.

He ended with six receptions for 86 yards and a touchdown to go along with 42 yards on two punt returns.

Kevin Harris was one of the few bright spots for South Carolina, which flubbed a chance to make it a one-score game in the final minute. The sophomore ran 22 times for 100 yards and a score.

Collin Hill completed 28 of 47 passes for 212 yards and two touchdowns. He was sacked four times. He threw behind Shi Smith in the end zone on Carolina’s final play, which ended an 18-play, 7-plus minute drive without any points.

South Carolina: Probably needs to win next week to avoid an 0-6 start. After playing Vanderbilt, the Gamecocks have Auburn, LSU and Texas A&M on tap.

Florida: Defensive issues abound. The Gators can’t seem to stop the run and are having all kinds of trouble getting consistent pressure on quarterbacks.

A week after Muschamp called for a field goal while trailing Tennessee by seven points in the final minutes, he had another head-scratcher.

Muschamp sent out the field goal team on a fourth-and-2 play with his team down 38-14 late in the third. Parker White made the 45-yard field goal to make it a 21-point deficit. But the Gamecocks needed touchdowns, not field goals to have a chance.

The Gamecocks also were draining the play clock and running the ball in the final minutes of the game while trailing by two touchdowns.

A big reason South Carolina couldn’t keep up in the first half was dropped passes. The Gamecocks had four in the opening 30 minutes, including three in six plays. Tight end Nick Muse and receivers Josh Vann and Xavier Legette each had costly drops on consecutive possessions that ended with punts.

Receiver Rico Powers had another one in the second quarter, although the ball was contested by cornerback Chester Kimbrough.

Late ESPN writer Ed Aschoff, a Florida graduate whose first job was covering the Gators for the Gainesville Sun, had a cutout in front of the band. He was a drummer in Florida’s marching band during college.

Nine Florida players were sidelined for the game, including two projected defensive starters. Defensive tackle Kyree Campbell and safeties Brad Stewart and C.J. McWilliams were on the team’s unavailable list. It was the second straight week Campbell and Stewart were out.

Without Stewart and his backup, McWilliams, Florida moved cornerback Marco Wilson to the “star” position.

South Carolina visits Vanderbilt next Saturday. The Gamecocks have won 11 straight in the series, their longest in league play.

Florida takes its “Kyle to Kyle Show” to Kyle Field to play Texas A&M next Saturday. The Gators beat the Johnny Manziel-led Aggies in their last trip there in 2012.

Democrats are projected to expand their majority in the U.S. House due to an erosion of President Trump‘s support in suburban communities

New form of COVID-19 testing comes to Lexington, can confirm results in 15 minutes

Here’s All the Fashion News You Missed This Week