HOW TO VOTE: AP’s state-by-state interactive has details on how to vote in this election.

SUNDAY DRIVE: President Donald Trump left his hospital suite for a brief ride in a motorcade, ignoring his own status as a contagious carrier of the coronavirus. Well-wishers outside Walter Reed National Military Medical Center in Maryland cheered as Trump’s black SUV passed. The ride came even as Trump declared in a video a newfound appreciation for the seriousness of the virus, stating that “I get it.” Trump’s doctors say he could be released as early as Monday.

TRUMP’S DEFENDER: Vice President Mike Pence will take a leading role in campaigning around the country in the final stretch before the Nov. 3 election, aiming to keep the president’s supporters energized and deflecting criticism of his handling of a virus that has killed nearly 210,000 Americans. The president’s COVID-19 diagnosis has intensified scrutiny of the administration’s cavalier approach to the pandemic. 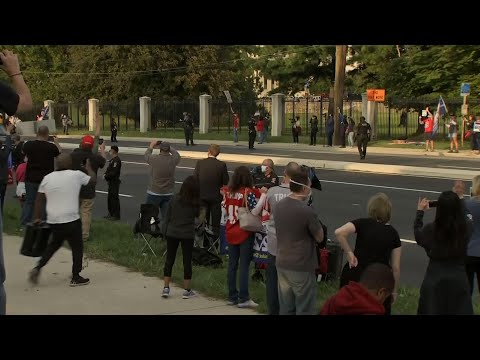 VOTER FRAUD: In the run up to Election Day, Trump is seizing on small, potentially routine voting issues to suggest the election is rigged. But there is no evidence there is any widespread voter fraud as the president has suggested. Nevertheless, his comments have been amplified by his campaign, supporters and allies, including Attorney General William Barr, adding heft to the claims.

NEW TERM: The Supreme Court opens a new term with Republicans on the cusp of realizing a dream 50 years in the making, a solid conservative majority that might roll back abortion rights, expand gun rights and shrink the power of government. Judge Amy Coney Barrett’s confirmation would cement a 6-3 conservative majority and diminish Chief Justice John Roberts’ ability to moderate the court’s decisions.

BALLOT DELAYS: Voters awaiting results in some of the key presidential battleground states on election night should be prepared to keep waiting, thanks to obstacles that will slow the count for what is expected to be a crush of mailed-in ballots amid the coronavirus pandemic. Rules in some crucial states prevent or give clerks little time to begin sorting ballots and verifying signatures before the election. That’s priming a scenario in which results may come in days — or even weeks — later.

QUOTABLE: “This is insanity. Every single person in the vehicle during that completely unnecessary presidential ‘drive-by’ just now has to be quarantined for 14 days. They might get sick. They may die.” — Dr. James P. Phillips, an attending physician at Walter Reed who is a critic of Trump and his handling of the pandemic.

AP EXPLAINS: What happens if a candidate for president dies?

How can the Supreme Court, other federal courts impact the 2020 election?